When creating advertising, don’t make your audience connect too many dots

Chevy’s TV commercial for the Cruze leaves me confused, until now … 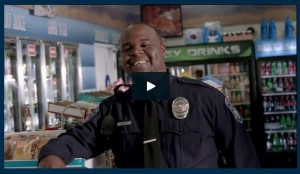 I’ve watched this TV  commercial dozens of times over the past few weeks, and I couldn’t figure it out – until today.  I finally connected the dots.

If you are creating advertising of any type, are you making your audience work too hard?

The New England Chevrolet Dealers Association has been running this ad for the Chevy Cruze.

The ad opens with a man (Stan) walking into a quick mart-type gas station.  As soon as he walks through the door, everyone calls out his name with a warm welcome.  He is clearly a regular.  In the background, we hear the familiar theme song from the old Cheers tv show – the one with the line “where everyone knows your name.”

Soon after Stan places his gas order ($55 on pump 3), another man walks into the store.

Suddenly the music stops and no one says a word.

The second man walks up to the cashier and makes a small purchase (but no gas).  He leaves the store and hops into his Cruze.

The ad closes with a voice-over that tells us the Chevy Cruze gets 38 miles per gallon.  And then it cuts to a screen shot with leasing promotions.

(Another version of the ad – which I found online at iSpot.tv– uses a different voice-over that does a better job of explaining the ad.  The voice-over actually mentions the fact that the Cruze is a hybrid.

But neither voice-over connects the dots very well.  At least not for me.  And I pay attention to these things.

If you haven’t figured it out yet, let me explain the ad:

As I write this, I know this doesn’t seem like a complex concept.  And I’m sure it didn’t seem very complex when they created the ad.  But I think it’s a lot like a puzzle where the solution seems so simple and obvious after it’s revealed

To the casual observer – meaning the general public – I am convinced that the central message does not get through.  If ever there was a case for a focus group, this was it.

Other problems with this ad

What also should be pointed out here is  that most memorable point of the ad – the cold/negative reaction of the people in the store to the Cruze driver – is now associated with the product.  You see this in advertising all the time where most of the ad is focused on a negative scenario before the product is introduced as an alternative or a solution.  The problem is that the negative is what viewers remember – which is not exactly the objective.

Beyond that, I think there are two more reasons why this ad doesn’t work.

Second, there is nothing in the ad that differentiates the Cruze from its competitors – meaning other hybrids.  The gas mileage is the obvious main selling point of the product, but so it is for all hybrids.  Wasn’t there something else that could be said about the Cruze?

Like many of you, I enjoy connecting the dots of a good mystery.  But your advertising shouldn’t require the skills of Miss Marple.